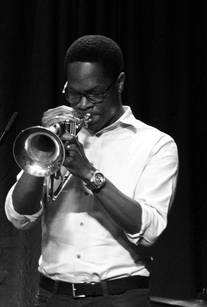 Brandon Lee (c) Valèrie C. Courrèges
Jazz trumpeter Brandon Lee was born and raised in Houston, Texas. Growing up in a musical family, Brandon began playing piano at an early age and by age 9 he started his formal training on the trumpet. Brandon excelled on the trumpet throughout his schooling and during his senior year at the Houston High School for the Performing and Visual Arts, Brandon was selected by Wynton Marsalis to perform with the Jazz at Lincoln Center Orchestra for a Louis Armstrong PBS special. In 2001, Brandon would become one of 18 students selected to become a part of the inaugural class of the Jazz Studies program at the Juilliard School. While at Juilliard, Brandon performed with many of the jazz giants including Benny Golson, Kenny Barron, Ray Brown, Clark Terry and Hank Jones, just to name a few. Brandon represented the jazz program as he has traveled to Ireland, England, Italy, Japan, and Costa Rica, and El Salvador. On many occasions, he taught master classes and performed in major concert halls with the Juilliard Jazz Orchestra. In 2005 Brandon completed his Bachelors of Music degree and in 2007 he completed his Masters of Music degree at The Juilliard School.

In August of 2007 Brandon released his debut album, From Within, and in March of 2010, Brandon released his second CD entitled Absolute-Lee, which featured all original compositions. Both recordings continue to be featured on local radio and satellite radio stations throughout the US and abroad. Soon after the March 2010 CD release, Brandon was asked to perform his first major concert under his own billing at the Wortham Theater in Houston, TX. An overflowing crowd of more than 800 people was in attendance. To add to his recording vitae, Brandon has also recorded with a plethora of jazz artists including the Jazz at Lincoln Center Orchestra, Eric Reed, Carl Allen, Rodney Whitaker, Vincent Herring, Kirk Whalum, Jazz Conceptions Orchestra, David Berger Big Band, and Fat Cat Big Band, and Shirley Crabb.

In the fall of 2008, Brandon became the youngest to join the faculty at The Juilliard School. As jazz faculty, Brandon primarily worked as the assistant conductor and conductor of jazz orchestra. Brandon conducted the Juilliard Jazz Orchestra and showcased the orchestra in many venues including Dizzy's Club Coca-Cola and Alice Tully Hall in New York City, Snow College in Utah, and University of Osaka in Osaka,Japan. Brandon also worked in other roles throughout the school year including improvisation instructor. In addition to his jazz faculty position, Brandon served on staff at the Juilliard School as the Artistic Coordinator of Educational Outreach from 2010-2012.

Presently, Brandon resides in North Carolina where he is Assistant Professor of Jazz Trumpet for the Miles Davis Jazz Studies Program at The University of North Carolina at Greensboro.