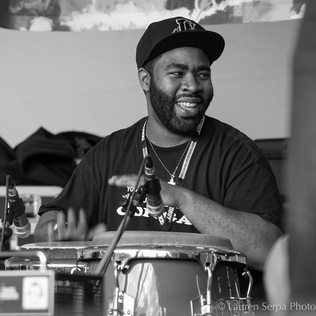 Born in New York City in 1985, Brevan Hampden was born instantly a member of a high-level musical family; his father Ivan, who has toured with Luther Vandross, Vanessa Williams, Jennifer Lopez, Roberta Flack, Grady Tate, and Ashford & Simpson, and his mother Brenda, who has performed on Broadway, with Dizzy Gillespie, Angie Bofill, Marian Anderson, and Jazzmobile.
Brevan completed the Bachelor’s of Jazz Studies degree at NCCU in December 2009. He has made quite a name for himself by performing locally in venues in Raleigh, Durham, Chapel Hill, and all over North Carolina. More recently, Brevan completed his Master’s in Jazz Studies/Performance at CUNY Queens College in Flushing, NY in May 2016. While at Queens College, he studied with many internationally acclaimed artists, such as Michael Mossman, Antonio Hart, Jeb Patton, and David Berkman. He studied drums and percussion with Donald Edwards and Vince Cherico. He also performed in the New York City area with many Grammy award-winning artists, such as Bilal, Ben Williams, Phil Cook, Roy Hargrove, Myron Walden, and Frank McComb. He is also enjoying some national recognition by performing many different styles of music, such as, Jazz with Branford Marsalis and Joey Calderazzo, Americana with Phil Cook and the GuitarHeels, Salsa with Tito Rojas, Richie Ray, and North Carolina Salsa Ensemble Orquesta GarDel , Funk/R&B with Aretha Franklin, and Hip-Hop with Pete Rock, DJ Premier, Nice N’ Smooth, Raekwon (from the Wu-Tang Clan), and 9th Wonder, as well as his Latin Jazz ensemble, PrimeraJazz, his Salsa ensemble, Conjunto Breve, and many other local groups in the Triangle Area.