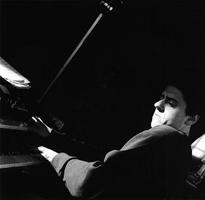 Gary Versace Biography
​
Since basing himself in NYC in 2002, originally hailing from Cos Cob, CT, jazz pianist, organist and accordionist Gary Versace has become one of the busiest and most versatile musicians on the scene, often featured in bands led by musicians such as John Scofield, John Abercrombie, Al Foster, Regina Carter, Maria Schneider, Madeleine Peyroux, Matt Wilson, Joe Magnarelli, Andy LaVerne, Adam Nussbaum, Brad Shepik, Ingrid Jensen and many others.
Recent CD releases include appearances as pianist on Ralph Alessi's 'Quiver" (ECM records) which received 4.5 stars in Downbeat, as accordionist on Maria Schneider's Grammy-winning 'The Thompson Fields,' as Hammond organist on Ellery Eskelin's 'Trio Willisau: Live' and Rich Perry's 'Organique,' and on all three instruments on Kurt Elling's 'Passion World.'
Versace won the "Rising Star' category on the Hammond organ in Downbeat's Critic's Poll in 2009 and 2010, and has placed in the primary Organ category consistently for the last 5 years. He won the Jazz Jounalists' Association's "Best Organist" award in 2012, and his work has been reviewed and featured in many national and international publications. He appeared twice as a guest on Marian McPartland's acclaimed NPR show 'Piano Jazz,' and McPartland has described him as '...endlessly inventive...(Versace) really has an extraordinary talent.'
He has several CD's under his own name on the SteepleChase and Criss Cross labels, and has appeared as a guest on almost 75 more.
Gary Versace has a masters degree in music performance from the Eastman School of Music, and spent eight years as a tenured associate professor in the jazz studies department at the University of Oregon. He remains active as a clinician and guest soloist both nationally and around the world.