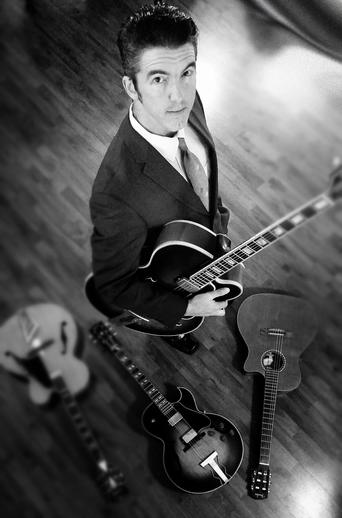 KEVIN VAN SANT - JAZZ GUITARIST
Raleigh-Durham North Carolina based guitarist, composer, and educator
Kevin Van Sant has been performing jazz music for more than twenty years. As a self-taught player, he has honed a distinctive style rooted in the tradition of his early influences such as Wes Montgomery, Jim Hall, and Joe Pass, while keeping an ear open to the continuing evolution of the jazz language and contemporary players. Owen Cordle, a contributing writer to Jazz Times magazine, has written of Kevin's guitar playing: “Van Sant’s mastery is remarkable”. And from Jazz Guitar Life: "His commitment to the instrument, as an improviser and accompanist, is quite accomplished and comprehensive, bowing to the tradition, while acknowledging a modern familiarity as well."
A virtuosic solo guitarist and accomplished ensemble player, Kevin has performed around the world and at major jazz festivals including five times at the Montreux Jazz Festival in Switzerland. He has performed with many distinguished musicians including Joe Chambers, Nnenna Freelon, Chip Crawford, Stephen Riley, James "Saxsmo" Gates, Robert Trowers, Kobie Watkins, Chad Eby, Alvin Atkinson, Stephanie Nakasian, Ray Codrington, and "Blue Lou" Marini. Since 2010 Kevin has been a member of Grammy nominated bassist John Brown’s big band. As a member of this group he has performed and recorded with Cyrus Chestnut, Adonis Rose, Jon Faddis, Terence

Blanchard, Rene Marie, Diane Schuur, Greg Tardy, Herlin Riley, Derrick and Vincent Gardner, Jason Marshall, and others among the most prominent jazz musicians working today.
Kevin has performed for live broadcasts numerous times on WUNC, WNCU, and WSHA radio stations as well as on WUNC and WNCN TV. He has released eleven CDs as a leader or co-leader, most recently a critically acclaimed duo project featuring the music of Horace Silver. Currently he leads several configurations of his own groups in performances in the Triangle area and across the state. Upcoming projects include a CD of all original music programmed in a unique and inventive format. In 2016 Kevin joined the faculty of Duke University as Jazz Guitar Instructor.