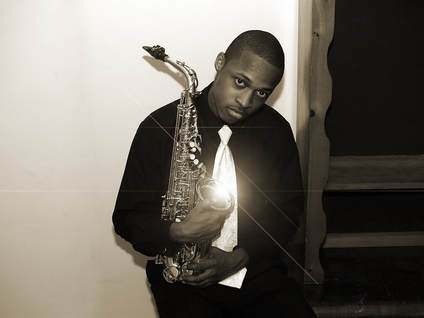 Sam King is a writer, musician, and jazz enthusiast from the great city of Baltimore. Sam began playing the saxophone at the tender age of 12. He received his high school education at the Baltimore School for the Arts, Milwaukee High School of the Arts, and finally returned back to Baltimore to graduate from the Cab Calloway Music Program at Frederick Douglas High School. It was the musical training that he received at these institutions that cultivated his love for and development in the field of music. Upon completion of his high school career, he was accepted into the Fine and Performing Arts program of St. Augustine’s College, located in Raleigh, North Carolina. During his tenure at this Historically Black College, he was a member of the concert band, jazz band, pep band, marching band, gospel choir band, saxophone quartet ensemble, and St. Augustine’s very own student-developed performing group, Creative Sounds of Music. In the fall of 2006,Sam transferred to the fine and performing arts department of Howard University, under the direction of Fred Irby. It was during his tenure at Howard that he traveled to Japan and played for the Howard University Jazz Ensemble recording.
Sam King has played with musical legends such as Arnold Sterling – jazz great and Baltimore native that performed with musical giants such as Dexter Gordon, Lou Donaldson, and Sonny Stitt – the late James Brown’s former trombonist Fred Wesley, John Coltrane disciple Andrew Jackson,tenor saxophonist Ted Baker, and world renowned saxophonist Tim Green. He has also opened for award winning Gospel recording artist Yolanda Adams, shared the stage with Hezekiah Walker, and performed for former NAACP President Kweisi Mfume. In 2010,Sam King made a guest appearance on the longest continuously running original series on cable television, Bobby Jones Gospel.
Sam King has a genuine desire to teach music to young kids and teenagers who stand where he stood just years ago. He wants to help them hone their talents, sharpen their skills, and cultivate their love for music. All in all,Sam King says that he wants to “create an educational experience for children that may not be made possible anywhere else”.
As of Fall 2017 Sam King has decided to go back to school to pursue a undergraduate Jazz Studies degree. He is currently enrolled as a full time student at thee North Carolina Central University which is located in Durham N.C. He is a junior in the Jazz Studies program under direction of Dr.Ira Wiggins. Sam King is also studying with 2 artist in residence at NCCU, Branford Marsalis (tenor saxophone) and Joey Calderazzo (piano). Since his enrollment at NCCU Sam King has auditioned and made all of the top groups in the Jazz Studies department which consist of NCCU Jazz ensemble 1 and NCCU Jazz combo 1. Just recently NCCU Jazz ensemble was invited to
perform at the 9th annual JEN(Jazz Educators Network) Conference in Dallas Texas. The
performance featured the NCCU Jazz ensemble Along side Branford Marsalis and Joey Calderazzo. Sam King is very adamant about pursuing his Jazz studies degree and has plans of later getting a Master's in Jazz studies from Temple University located in Philadelphia P.A.