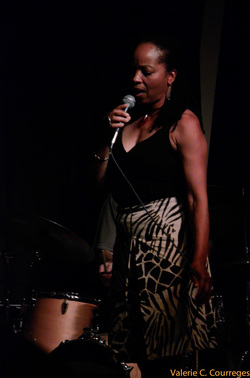 Lois Deloatch’s career spans nearly three decades in the arts, philanthropy and community service. As an artist, Deloatch is noted for her rich contralto voice and expansive repertoire of classic tunes and original compositions. With five recordings as leader, she has appeared in concert throughout the United States and internationally. Roots: Jazz/Blues/Spirituals, a soulful and eclectic mix of music including interpretations of traditional compositions, was released in 2010. Hymn to Freedom: Homage to Oscar Peterson was released in limited edition in 2008 and garnered international accolades including selection as one of the Top 10 CDs of 2008 by JazzTimes Magazine’s music critic Owen Cordle.

Deloatch is scheduled to premier a new recording of popular and original compositions as well as her first book, 1001 Ways to Give and 101 Reason Why You Should in 2014.

"As jazz vocalist, with a sultry voice and presentation in the tradition of Sarah Vaughn, and as a lyricist, Lois Deloatch gives testament to the well known but not always observed fact that knowing the meaning of lyrics is essential to any meaningful interpretation of a song whether one is a singer or instrumentalist. Nevertheless, only some voices are blessed with that jazz sound, feeling, and intuition, and Lois is surely one of them."
—Bob Gish, Jazz Improv MagazineLois forges innovative partnerships with artists, scholars and communities covering a broad range of areas. She has conducted extensive research and published several articles on jazz and culture. Her documentary project, Sam Reed and The Trumpet of Conscience, is a permanent part of Duke University Library’s John Hope Franklin Collection.

During her 20+ career in higher education, Deloatch held administrative and leadership positions at UNC-Chapel Hill, Duke University and North Carolina Central University. She is founder and principal of Northampton Partners, LLC, a philanthropy and fundraising consulting firm committed to supporting people and organizations that seek to make a positive impact in the world. More information is on the website: www.northamptonpartnersllc.com.

Deloatch hails from rural Northampton County, North Carolina. She holds a Bachelor of Arts from the University of North Carolina–Chapel Hill and the Master of Arts from Duke University. She has received numerous awards for her talent and service to the community including an Emerging Artist Award from the Durham Arts Council, the Shirley Caesar Community Service Award from 103.9 FM the Light and the Indy Arts Award from the Independent Weekly. For more info