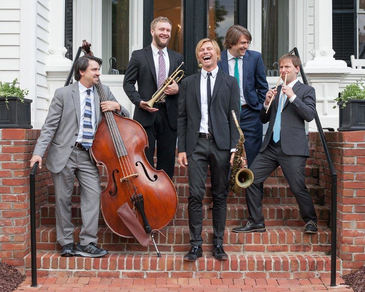 For over a decade, Peter Lamb and the Wolves have been playing music together throughout various cities in North Carolina, and surrounding states. They are a jazz quintet, consisting of band leader Peter Lamb on saxophone, Mark Wells on keyboard and vocals, Paul Rogers, Peter's younger brother on trumpet, Peter Kimosh on upright bass, and Stephen Coffman on drums. The music they play is an eclectic variety of both originals and arrangements ranging from 1920s New Orleans Jazz to 1980s pop to Eastern European Brass Band.
Peter Lamb and the Wolves have produced three albums, and they are currently working on their fourth, which is set to be released in the Spring of 2019. They have held a residency at Humble Pie in Raleigh, NC for 9 years and have played for countless special events, including the 2012 Inaugural Ball for President Obama at Fort Myer in Washington D.C. and the 2011 Democratic National Convention in Charlotte. They have been guests on NPR's The State of Things with Frank Stasio three times and were also named Best Jazz Band in the Triangle by The Independent Magazine for two consecutive years.