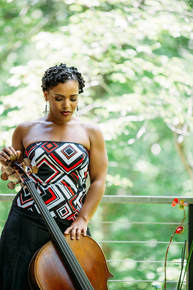 Shana Tucker is a cellist and singer-songwriter who credits her genre-bending "ChamberSoul" journey to the influences of her jazz and classical roots interwoven with 80's & 90's pop music, movie soundtracks, and worldbeat. Touted by JazzTimes Magazine as “a jazz talent...whose imprint and vitality has already been quite visible in North Carolina,” Shana’s style and sound as been described as a mash-up of Dianne Reeves, Joni Mitchell, and Tracy Chapman, with an efficient complexity that is reminiscent of Bill Withers. ChamberSoul best describes what the listener should expect when experiencing Shana's music. "I’m intrinsically drawn to 'real' instruments with resonance and depth of acoustic body," she says. "I always try to set a tone of closeness with my colleagues on stage, and also with the audience, so that the music draws and keeps everyone near."

A 2011 NPR interview about Shana's debut CD, "SHiNE" and her ChamberSoul style prompted an invitation from Cirque du Soleil to join the company as cellist/vocalist for their show, KÀ in Las Vegas. She performed toured for the Cirque until relocating back to the Triangle area of North Carolina in 2017 to pursue a full-time performance/touring/recording/teaching schedule.

A front-line advocate for arts education, Shana is a teaching artist with United Arts Council, The Smith Center for Performing Arts, and NC Wolf Trap. She also devotes a considerable amount of her time to outreach activities throughout the year as part of her mission to promote arts education programming for students of all ages. -- www.shanatucker.com