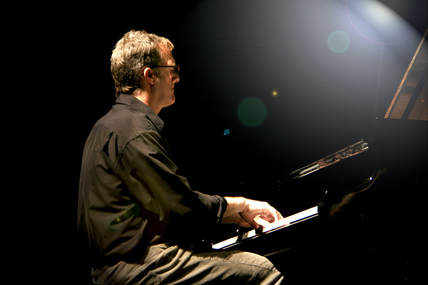 As a composer, his works have been performed by ensembles throughout the United States, including the West Point Military Academy Band, Dallas Chamber Orchestra, Montclair State Wind Symphony, Crested Butte Chamber Orchestra, the MIT Concert Band, North Carolina Central Percussion Ensemble, UNC Symphony Orchestra, UNC Wind Ensemble and many others, and at such venues as the College Band Directors National Association, the International Tuba Euphonium Association, and the Australian Trumpet Guild.

Since 2014, Anderson’s collaborations with jazz artists from the Caribbean (The Dominican Jazz Project and Juan Alamo’s, Marimjazzia) have resulted in several performances in the Dominican Republic and a Puerto Rico.  Previously, Anderson was pianist with the Lynn Seaton Trio (2000-03), the North Texas One O’clock Lab Band (Lab 2000-01), was winner of the Lionel Hampton Jazz Festival piano competition (1997), and keyboardist for gold-recording country artist, Kevin Sharp (1996-97).

“The pocket he plays in is precise and intense, whether he imposes alien forms onto his pieces or simply thwarts the expectations of rhythm and harmony…there is no question of the beauty in Anderson’s playing…”
—Jay Deshpande, All about Jazz

…Quest…composed by Stephen R. Anderson, establishes a method of creating a four-part texture by just two instruments.  This, to my ears, is the most innovative work on the CD, and is really quite striking in its originality.
—David DeBoor Canfield, Fanfare Magazine
(review of Quest, by Duo XXI, Albany Records)

…“an exemplar of the scholar-musician.”
—Jay Deshpande, All about Jazz

…one of the bright stars of the contemporary scene.
—It’s Just Jazz, KZFR 90.1 FM

Isaiah is a powerful work, full of colors both vivid and, at times, pastel. The audience received this premiere performance with enthusiastic applause, with good reason.
—Geoffrey Simon, Classical Voice of North Carolina

…“full of creative energy and the joy of musical discovery.”
—Mark Sullivan, All about Jazz (review of the Dominican Jazz Project, Summit Records)